It‘s mid February 2021 at the time of writing this chapter in the history of Platypus Theater. There’s snow everywhere. Many of Berlin’s lakes and canals are iced over and people are lightheartedly skating on the ice, some are playing hockey, some are even taking a dip. People who don’t trust the ice are riding toboggans down the snow covered hills in one of Berlin’s many parks, throwing snow balls at each other, building snowmen or snow women, or merely walking, enjoying the blue sky and sunshine, the “thrill of the chill” and the sound of snow crunching underfoot. I’m thinking of the famous painting “Hunter in Snow” from Peter Bruegel. The colour white is dominating the Berlin landscape. It’s beautiful, it’s special and it’s a good antidote for the Corona Blues and a good way to lead into the story of the making of the Platypus play “Ach du dickes Ei” which is about two penguins who live in the ice in the South Pole.

We made this play in 1990 with financial support from the Berlin Senate. 27,000 DM. The actors were Kathrin Megnet and Heike Ulbrich. Whilst researching for this story about the origins of this play I was saddened to find out that Kathrin Megnet died in June 2020. I wanted to ask her about her memories of putting the play together. Too late. Rest in Peace Kathrin. She was 63 when she died. What a loss. Unfortunately we hadn’t kept in contact as Kathrin had moved to Freiburg in South Germany. Kathrin had worked with us on “Jean Labadie’s Black Dog” or “Wer hat Angst vor dem schwarzen Hund?” She played cello and narrated some of the story. Anja Scollin was pregnant at the time and due to conceive in July so it wasn’t practical for her to act in the play. We decided that I would direst the play and search for another actress. Kathrin suggested Heike Ulbrich with whom she had studied under Professor Dr Wolfgang Nickel. Anja and I thought this was a good idea and so Kathrin and Heike and I started devising the play in our rehearsal room in Werner Voß Damm 54b in Tempelhof, in March 1990.

We had set ourselves a practical framework. The new play would be for a cast of two and should be for suitable for three year olds and upwards. Our attempt to crack the schools market with “Jean Labadie’s Black Dog” hadn’t worked so we decided to aim the play at kindergarten kids. We thought about animal characters. Heike suggested penguins. She was fascinated by penguins. Penguins do have a lot to offer, they stand upright, they have this amusing waddling way of moving forwards, they have a very distinctive look. We went to the Berlin zoo and observed penguins. I read lots of National Geographic articles (there was no Internet at that time) and made notes in my work book like “when the penguin is hatching its egg, it keeps very still” and “the Macaroni penguins were trumpeting noisily and waving their flippers rhythmically.” Another article described the “constant bickering” amongst the congregation of penguins. All in all, penguins seemed like a very good starting point for a play.

We decided in advance that the set and costumes for the play should be easy to transport, easy to set up, easy to pull down. “Let’s limit ourselves to two suitcases and two trolleys.” Neither Kathrin nor Heike had a car, so the idea was to have a play that was possible to transport in the underground or on buses. Keep it simple. Early on in the process Kathrin, a gifted musician, brought a small Hohner accordion with her to the rehearsals. It was perfect for the play that we were developing although it did mean the actors had to carry one extra case. I brought in some music from Charlie Chaplin which inspired our work on the penguin movement and the song that we composed for the show.

“ Ping ping ping Pinguine/ Die wohnen am kühlen Südpol/Ping ping ping Pinguine/die brauchens ganz schön kalt.” That‘s the chorus. We did the play in German and it’s not yet been translated but the lyrics in English would roughly go like this “Ping ping ping penguins/they live in the South Pole/ ping ping ping penguins/ they need it really cold.” It was a simple, sing along song for the three year olds to join in on. The first verse is “Uns schmecken kleine Fische/dafür tauchen wir ganz tief/doch wenn der Seeleo auftaucht/ dann geht das auch mal schief.“ „ We like the taste of little fish/we dive down deep to catch them/but when the Sea leopard appears/things can go wrong.“

The premiere of the play was in September of 1990. People often ask us how long it takes to develop a play. This one took six months. We did struggle to work up a satisfactory plot. I remember that at certain moments we were despondent, thinking we couldn’t do what we had set out to do. When you read this description of the play, it all sounds feasible and it’s hard for an outsider to comprehend that it took a long time to arrive at the central story and to build the play. As always, it was a case of trial and error. Here’s the simple description which we used to advertise the play.

“Two penguin friends, Patsch and Pingusch find a stolen penguin egg. They protect “their” egg from the attacks of Robert the robber seagull and Leo the leopard seal. They also have to keep the egg warm. Will the baby penguin be safely born and will it find its parents?”

I was influenced by Bruno Bettelheim’s book “The Uses of Enchantment.”I quote, “dangerous and helpful animals stand for our animal nature and instinctive drives. The dangerous animal symbolizes the untamed “id” and the helpful animal represents our natural energy against the “id.” I was also influenced by our daughter Jennifer who was four years old at the time and in the process of learning how to swim, a skill that a baby Adelie penguin acquires in nine weeks. When you’re inventing plays for children it’s great to be in close contact with kids of the age group you’re aiming at.

Peter Gößwein shared his experiences of performing Ach Du Dickes Ei. He took over the role of “Patsch” when Kathrin Megnet moved to Freiburg. “I was new to children’s theater and there were a few things that were strange and unusual. It took a bit of getting used to. I remember one of my first performances of the play. Either I had spoken too loudly or played a note on the accordion too loudly. Whatever it was, a young girl in the front row started crying intensely. I felt shocked and helpless. Luckily a kindergarten teacher managed to comfort that poor child.” I suppose nearly everyone who has performed for this age group has had a similar experience. It can be very distressing for the child and also for the actor. Of course if the children start crying regularly at a particular moment in a play it’s clear that you have to change something in the play. But it’s not always like that. Sometimes a child may cry for a reason that’s unrelated to the play. Summing up, Peter said “the play is funny, but also tragic and exciting. The live music fits. I really enjoyed playing two characters, a “goody” and a “baddy.” When I think back about the play, I the penguin song comes immediately to mind and I think to myself how nice it was doing that play.”

Heike Ulbrich, who, up until Corona struck, still performs the role of “Pingush” the penguin says “it was always very moving when the penguin baby hatched through the egg shell. And before that, when the two penguins find the abandoned egg and put it to their ear to see whether it’s alive. “It’s alive, it’s alive” what joy, what hope.

On the topic of hatching eggs, in the middle of working on the play, in July 1990, Anja gave birth. It was Emily, our second daughter. New life began for Emily and a new life for the play “Ach du Dickes Ei” began in September 1990.

A Platypus Theater production from 1990

Then Peter Gößwein and Heike Ulbrich.

Financial support from the Berlin Senate for Cultural Affairs.

Since 2003 performed by Heike Ulbrich and Claas Hoffman 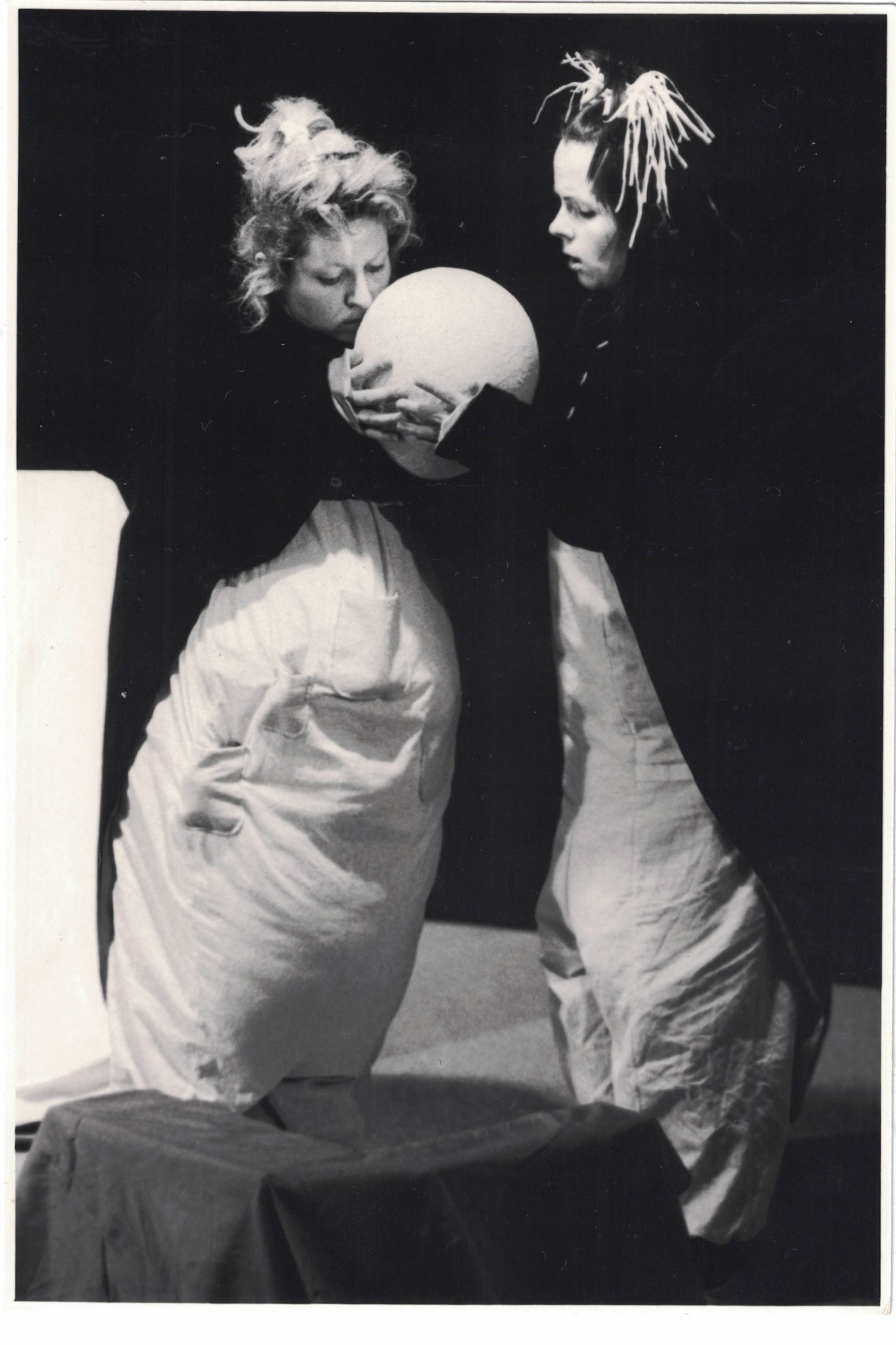