„ If Napoleon hadn't been so tired on 18th October 1813, he might have won the Battle of Leipzig.“ Many events that have decided the course of human history came about by chance and the opposite of something completely different could just as well have happened. Chance is the greatest of all the great powers in the world.“ (Erich Kästner)

This play came about by chance, or a series of chances. It was 1986 and time for a new play. Per chance I met Günther W. Hornberger. His partner, Frederike, was doing a course in Moreno Institute Psychodrama with Anja. Günther's son was the same age as our first daughter Jenny. Günther and I met pushing prams around the block while Frederike and Anja did their psychodrama sessions. We decide to work on a play together and Platypus Theater was suddenly a three person theater.

Günther was, and still is, a multi talent and, like Anja, a born and bred Berliner. He'd studied sociology and theology and had run a theater group which performed „Invisible Theater“ in the spirit of Augusto Boal. He was also a singer songwriter in the „folkie“ days and a poet and had performed in the West Berlin Kabarett scene. On top of all this, he had carpentry skills, was a very good organizer and last but definitely not least, he possessed a computer. An Atari 1024. In 1986 very few people had computers.

On his Atari computer, Günther wrote a first draft of the play. Then the three of us workshopped the draft and developed the play. Often the babies were present, but we managed to work. Our meetings and rehearsals took place in our „Pantomime School.“ It was Günther's first play and Anja's premiere as a director. Günther wanted to explore two themes, „work“ and „money.“ He believed it was possible to make these themes comprehensible for small children. We were aiming at 4+ age group. Anja and I were not so sure about this, but we knew we would only find out by doing it. It turned out to be a good mixture of text, songs and visual, physical comedy, with a number of clown routines.

The story line: The clown is a foreigner, travelling through Germany. He’s desperate for a job but sees a sign in Floh Finkelstein's shop, „Wanted: Window Decorator.“ Floh Finkelstein has a problem. He’s six months behind in his rental payments and is in danger of being evicted. Floh hopes that by making the display in his shop window more attractive, his business will improve. Clown Andy Laterne applies for the decorator job and gets it despite his language deficiencies and lack of qualifications. Business is slow at first. There are problems to be solved, but eventually a colourful auction sale involving the audience brings the required money. Floh can pay his debts. He even sells the business and buys two train tickets to Portugal, one for himself, one for Andy. The two new found friends depart singing “Weit, weit, weit geht die Reise.” The journey is long, long, long.

Before writing this blog, I looked at a film of the play and found myself laughing a lot. The film was made during one of our numerous performances in the Britzer Garten. We were in a small tent. There was no elevated stage. Close to the tent was a playground with a large wading pool. Our audiences were often wearing bathers or underpants. Parents sat at the back of the tent in chairs. Kids were seated on the floor. No lights, no microphones, no taped music. It was a case of quick set ups and quick get outs because another theater group would perform before us or after us. Performances were free. The audiences sang with us and commented on the action.

I have always been a great admirer of Peter Brook. In his book „The Empty Space“ there's a chapter entitled „Rough Theater.“ I find comfort and inspiration in his words „It's always the popular theatre that saves the day...it's the roughness. Salt, sweat, noise, smell: the theatre that's not in a theatre...audiences joining in, answering back...the torn sheet pinned up across the hall, the battered screen to conceal the quick changes-that one generic term theatre covers all this and the sparkling chandeliers too...the Rough Theatre is close to the people.“

As with the Clown Kangaroo play, the Clown and the Storekeeper Finkelstein was not funded. We paid for the production costs with the money we were earning from doing the other two plays. The stage set consisted of two collapsible but stable market stands and other connected poles. Anja sewed the curtains. Everything had to fit in or on top of the small Renault Rapid transporter Günther constructed the orange coloured wooden box. He could actually hide inside the box. This caused much merriment in the play which ran for a few years. 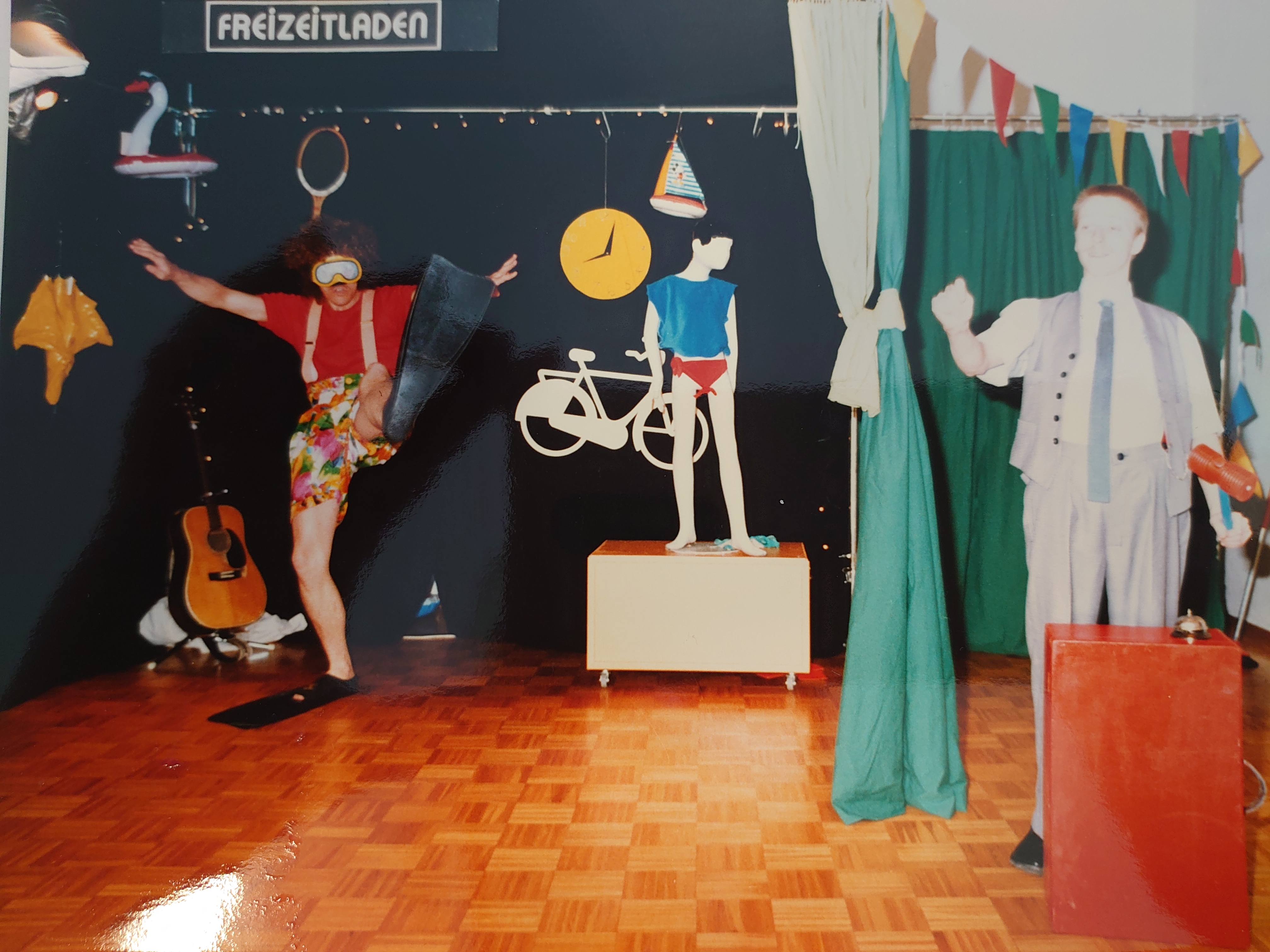 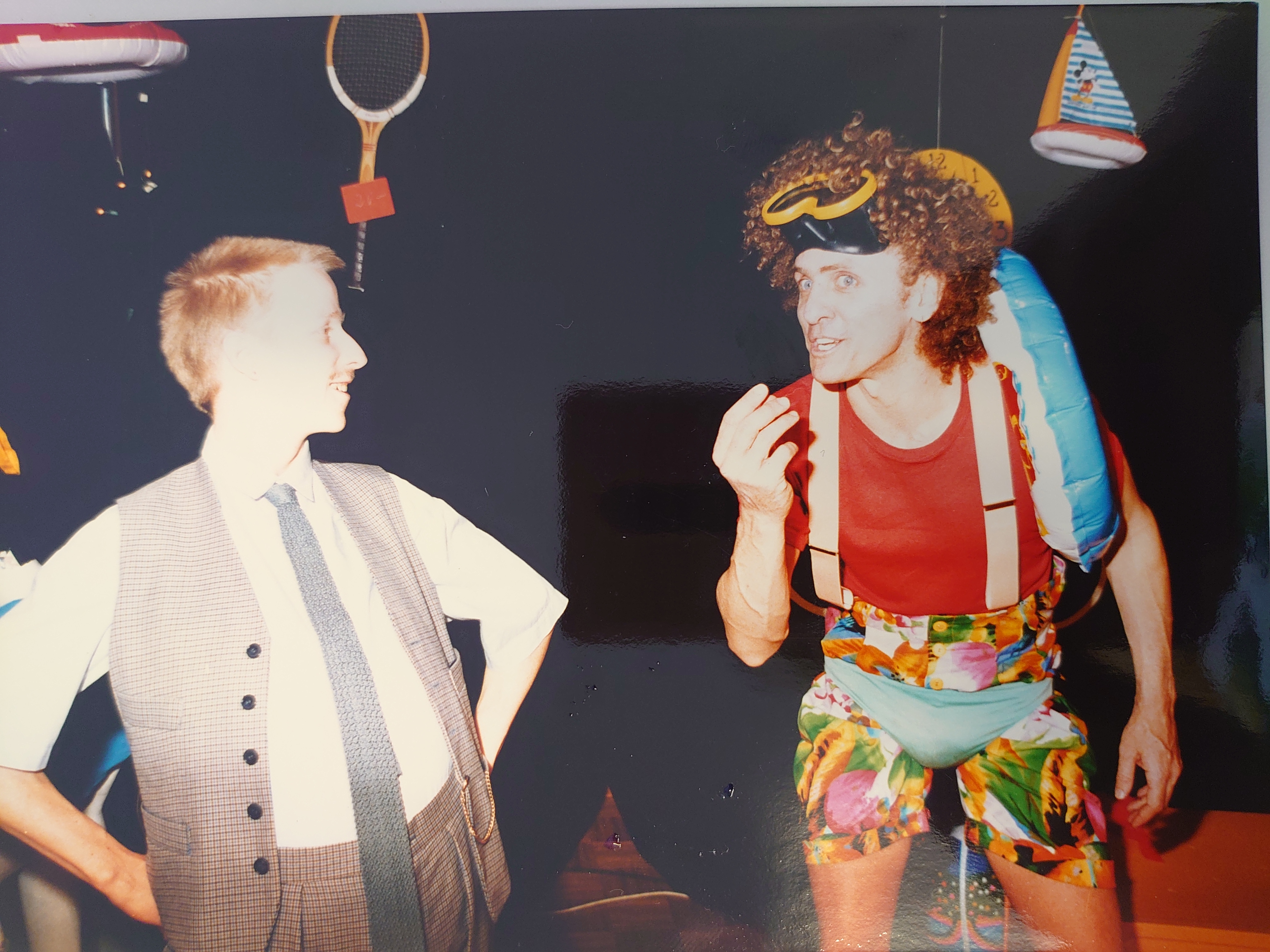