The Double Bass from Patrick Süsskind

The Double Bass from Patrick Süsskind

March 2nd, 1988. It’s early morning and I’m sitting on the front verandah of the family home in Adelaide with my mum and dad and my brother David, enjoying a cup of tea and the cool morning air. I’m back in my home town to perform The Double Bass, from Patrick Süsskind, in the Fringe Festival. Opening night was a full house and I already have a couple of near-capacity performances under my belt. My artist friend Peter Bok had created a terrific set and my brother David operated the sound and lights for the show and did the pre-show publicity. One journalist, Tim Lloyd, the arts editor for the local daily morning broadsheet newspaper The Advertiser, wrote “The play concerns a double bass player in a small provincial German Orchestra who is suffering a self induced crisis about his lack of recognition. His dilemma arises from his conviction that the role of the double bass is enormously important in the functioning of any orchestra, yet the instrument and its players are not given the status they deserve. The idea becomes the starting point for a wider commentary on the many unsung workers needed to make society function.” That was a pretty good description of the play and created interest amongst Adelaide theatergoers.

So there we are, drinking tea and browsing through the Advertiser, the city’s major daily newspaper, when we stumble on a review of the play with the title “Back to first Bass.” The journalist who reviewed my performance of the Double Bass in the Advertiser, built a reputation on his witty but often devastatingly vicious reviews which had earned him the nickname the “critic that ate Adelaide.” The review’s first sentence was “this one man show needs another one man.” We were all shocked, I was devastated. This review was destructive and spiteful. Is it the role of the reviewer to destroy artistic endeavour? I think not. A reviewer should point out problems and voice a personal opinion but not discount the positives in a performance. I’m told it’s easier and often more entertaining to put down a performance, but I don’t believe it’s the job of a reviewer to scare away potential audiences. Do critics realize the amount of hurt they can cause?

It was one man’s opinion and luckily, there were other opinions. There was a letter to the editor of the Advertiser criticizing the review and the critic himself. I quote: “I often wonder what qualifications, if any, drama and music critics have in Australia. In West Germany, where I have lived for the past 12 years, there are courses run by tertiary institutions for future music and theater critics...if the criticism is destructive the effect on the artist could be devastating.” The author of the letter continued “I find the review too severe. Equally severe and unjust is the critic’s description of Peter Scollin’s acting. I (and several other people to whom I have spoken) enjoyed his performance and felt he was able to keep the full concentration of the audience throughout the play.” This letter and a very positive review in the afternoon daily newspaper, “The News” gave me some comfort and encouragement. “ Scollin’s conduct as a professional musician in a regional German Orchestra was inspiring. The audience hung on for every stolen thought and rewarded Peter with a full house and a thunderous applause at the end.” Some people say “don’t read your reviews,” but that’s a very difficult bit of advice to follow. I was also able to get some coverage for the show on the nightly ABC current affairs program.

I shut out the negative review and enjoyed the remaining 13 performances. The Double Bass is a ninety minute monologue, at times very funny, particularly with regard to the sexual fantasies of the bass player or Süsskind’s criticism of orchestras. “I’m not saying there have been no so called revolutionary changes, of course there have. The last one was 150 years ago in the seating arrangements.” Speaking of seating arrangements, my mother sat in the front row of the Chapel, Theatre 62, every night, she was my prompter. As well as operating the lights, David played in the sound effects on a reel to reel tape recorder borrowed from Adelaide’s Chief Justice, a long time friend and neighbour. As has been the case with all of the Platypus plays, I learnt a lot. I became familiar with Schubert and what drives classical musicians. I learnt how to fake playing a double bass. I was thrilled to be performing for adults again.

In hindsight, it was risky doing the premiere in Adelaide at the festival. The rehearsal period in Berlin was rather short and I was busy with lots of organizational work both in Berlin and in Australia. It was the time of fax machines and landline telephones. In Berlin, I had managed to do two previews in the small rehearsal room in Werner-Voß-Damm, for a small audience of friends and acquaintances. Learning and internalizing the text was a big challenge. The play was filmed in Adelaide but I foolishly lent the one existing VHS Cassette I had to a Berlin journalist from SFB who somehow managed to lose it. So all I have is my memories and some photos and a metaphorical scar on my artistic self.

Directed by Joanne Leitner
Stage Design: Ilmar Caruso
Stage construction in Adelaide: Peter Bok
Thanks to the Berlin Senate for covering the air fare and transport costs.
Thanks to Brett Dean and Heather Betts for the interviews about what it’s like to be classical musician in an orchestra and to Brett for introducing me to Rudolf Watzel who lent me a Double Bass and taught me how to look as if I knew my way around it. 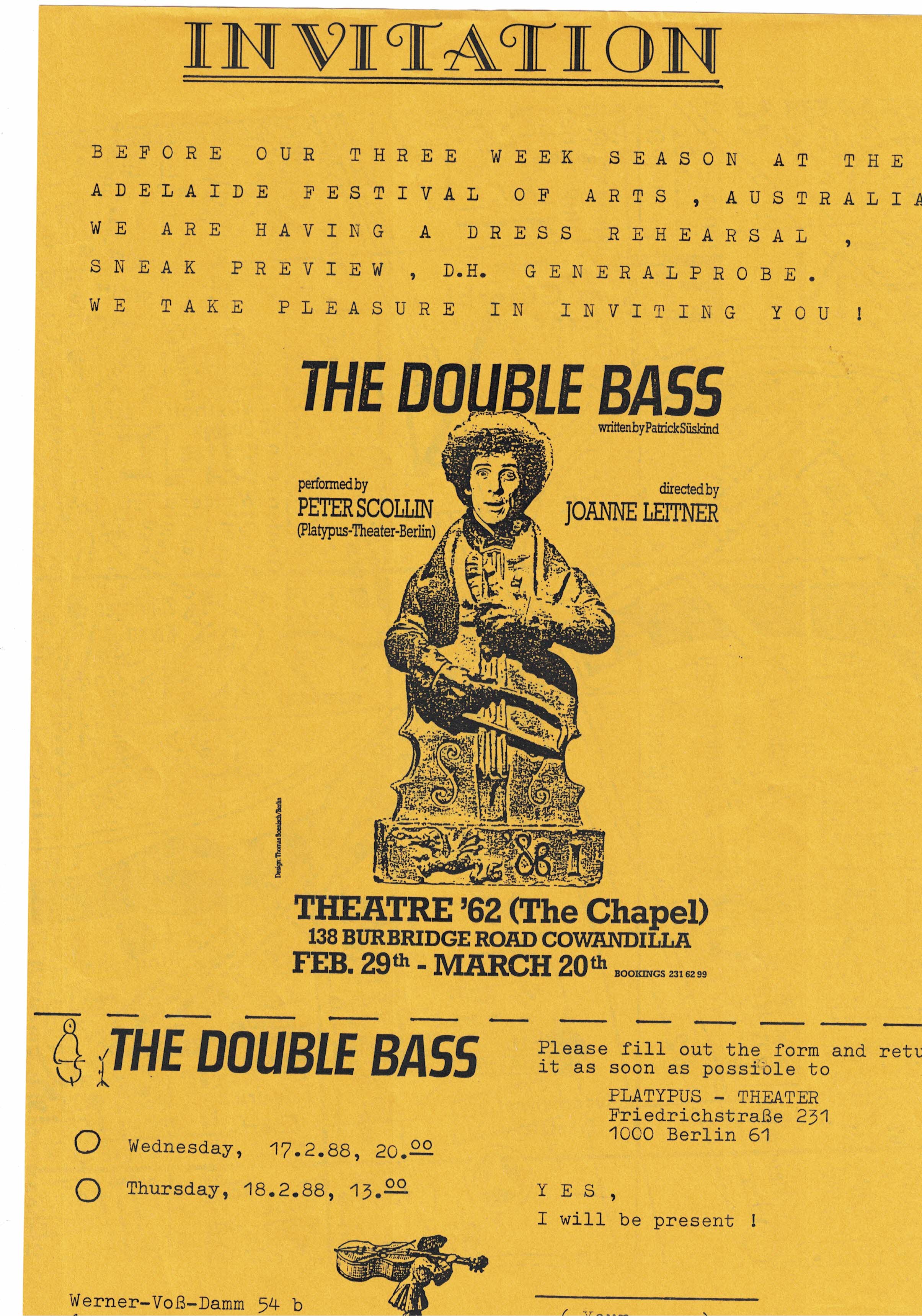